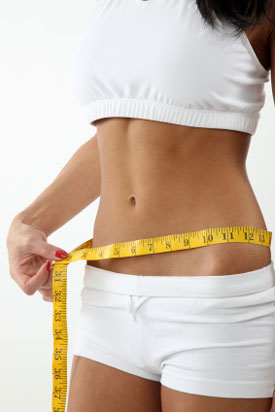 Lipo-Lean treatment is a pharmaceutical compound, which is administered through a series of micro-injections, using a tiny insulin needle, to permanently dissolve fat. Over time, fat cells expand where we least want them, around our middle, the buttocks, thighs, arms, or chin. To dissolve these pockets of fat, lipo/lean injections are used in the targeted treatment areas. The fat cells absorb the injection and become slightly inflamed, then harden. The hardened fat cells break down within a few weeks leading to measurable inch loss. At this point, the fat cell no longer exists and has been permanently removed from the body. With multiple treatments, the end result is a smooth, natural look in the area that is treated. Each person is born with a certain number of fat cells and after adolescence will not develop more.

Lipo/lean will dissolve fat permanently in the area of treatment and is believed by many users to be the alternative to Liposuction.  Lipo/lean treatments have been used for cosmetic purposes since the mid 90s.  No significant adverse affects attributable to the injections have been identified to date.  Youth RX has hundreds of patients who are using this product and seeing great results.

Why don’t “Spot Reducing” Workouts Work?
In the world of fitness, arms, abs, buns, and thighs are big business.  However, doing hundreds of arm curls won’t get rid of that fat on the bottom of your arms.  In fact, by over exercising any area of your body in an attempt to get rid of the fat, otherwise known as spot reducing, you might make the spot more muscular, and therefore make it look larger. Fat and muscle are two different kinds of tissue. Technically, most exercise will only tone your muscles, and if you have unwanted fat around or on top of your muscles, exercise alone will NOT get you that lean, tight appearance we all desire.

How about Liposuction as an Option?

Liposuction is very expensive and can be traumatic.  Some complications/symptoms include:

• Liposuction involves several small incisions; therefore, the possibility of an infection caused by bacteria can result.
• In some instances, you could have an allergic reaction to the anesthetic given.
• A cannula is used in liposuction and this may sometimes damage the tissue, which lies beneath the skin. This could show up on the skin surface as a spotted appearance.
• Sometimes there may be contour irregularities as a result of poor skin elasticity and/or uneven fat removal.
• Sometimes there can be friction burns to the nerves or the skin from the cannula movement.
• A fluid imbalance may result in some instances, as fat that is removed in liposuction contains a lot of fluid; and also, for the procedure, the plastic surgeon injects fluid. This can badly affect some of the main organs of the body.

Further most patients experience significant swelling as well as bruising for 6-12 weeks following the procedure.

What ingredients are contained in Lipo-Lean Injection?

Lipotropics – Are substances that can liquefy or homogenize fat. They increase the production of lecithin by the liver.  This helps cholesterol become soluble, thus lessening cholesterol deposits in the blood vessels and decreasing the chance of gallstone formation.  They detoxify amine (by-products of protein metabolism). This is important for people on a high protein diet.

They also increase resistance to disease.  It helps booster the thymus gland to carry out its anti-disease function by stimulating the product of antibodies.  Stimulating the growth of phagocytes, which surround and gobble up invading viruses and microbes. They also recognize and destroy foreign and abnormal tissue.  They prevent an abnormal accumulation of fat in the liver.  A fatty liver can cause a sluggish liver function.

Methionine – Is a lipotropic amino acid, which reduces fat and aids in lowering cholesterol.  Methionine seems to act as a catalyst for Choline and Inositol thus speeding up their function.   It is an amino acid, which plays an important role in cartilage formation, which in turn, aids in the relief of arthritis pain.  It also increases levels of serotonin, dopamine and phosphatides in the body, which improve your mood.  A deficiency of Methionine may lead to fatty degeneration and cirrhosis of the liver.

Inositol – Metabolizes fats and cholesterol, which aids in the transporting of fat in the blood system.  Thus, it aids in the redistribution of body fat.  It also helps lower cholesterol levels.

Choline – Is another lipotropic (fat emulsifier).  It aids in emulsifying cholesterol so that it doesn’t deposit on arterial walls.  It works well with Inositol to utilize fats and cholesterol and it also works well with Methionine in detoxifying amines, which are by-products of protein metabolism.

B-1– Needed for Carbohydrate Metabolism
B-2– Converts two other co-enzymes needed for normal tissue respirations.  It is necessary for activation of Vitamin B-6
B-3– Stimulates fat metabolism and liquefies fat in fat tissue
B-5– Converts fats and carbs into energy and aids in formation of anti-bodies
B-6– A co-enzyme that stimulates metabolic functions including amino acid metabolism
B-12– Benefits of B-12 are increased energy, increased production of Red Blood Cells and helps protect major organs by bringing oxygen to those organs

How often do I inject Lipo-Lean and where?

Specific amounts and frequency of use of the product will be prescribed by a physician based on your specific needs.   Basically, you inject the product into the area you wish to reduce, several times a week, again, as prescribed by the physician. The injections are done with tiny needles and you feel virtually nothing.  Clients report noticing significant results as early as two weeks after beginning the program.

Tell us a little bit more about yourself!

Fill out our detailed on-line Medical History/Lifestyle to grant us a little more insight into your lifestyle and your individual needs.

Our office will contact you to schedule a consultation. We will assist you in ordering the necessary blood tests on-line. This can be done at your convenience 24 hours a day.

Find a convenient lab location in your area.

After receiving your information you will receive an assessment from our Licensed physicians.

This will be used to create an plan catered to your specific needs optimizing hormone levels and including personal training, nutrition guidance, and weight loss program if recommended.

Since 2003 YOUTH-RX has provided wellness and Anti-Aging programs in the areas of Weight-Loss, Full-Spectrum Hormone Replacement and Sexual Enhancement.

Our wellness programs are designed by experts in the areas of Anti-Aging and Weight-Loss Medicine, Nutrition, Fitness and Education.

Why Is A “Reboot” Important for Men on Testosterone Injections? 7.28.22

High Estrogen in Men; Is it Okay or Toxic?

*Only a doctor can diagnose and prescribe hormones. No prescription will be provided unless a clinical need exists based on required lab work, physician consultation ,physical examination and current medical history provided either through a patient's personal Licensed physician or an associate  Licensed physician of YOUTH-RX. Agreeing to lab work does not automatically equate to clinical necessity or a resulting prescription. No claim or opinion at YOUTH-RX is intended to be, or should be construed to be, medical advice. Please consult with a healthcare professional before starting any therapeutic program.© 2003 YOUTH-RX